Aède of the Ocean and Land: A Play in Seven Acts 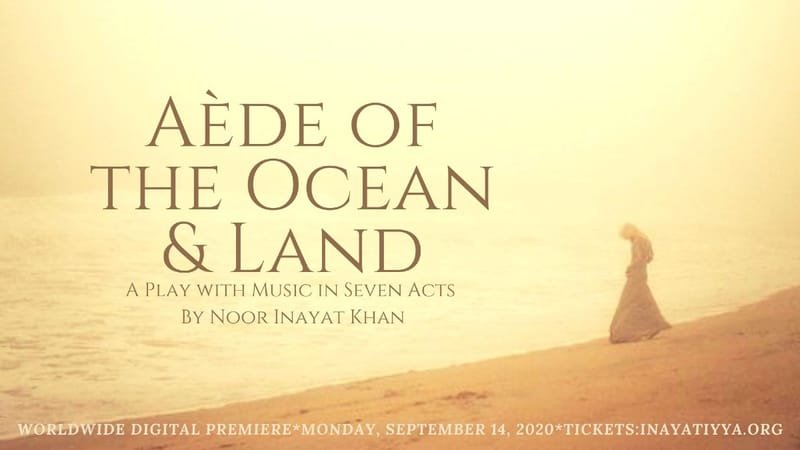 Noor Inayat Khan (1914-1944) is widely remembered as a hero and martyr of the Second World War. Her play, Aède of the Ocean and Land, written in verse, uses Homer’s Odyssey as its framework.”Noor Inayat Khan delicately infuses Homer’s epic poem with Sufi philosophy and weaves a narrative that is at once an ode to her parents as well as her own interpretation of the journey of life.” (Shrabani Basu) Noor reimagines Homer’s epic. The journey of Ulys in Aède is an allegory representing Noor’s father, the Indian mystic Hazrat Inayat Khan’s, spiritual journey in the West, while the seven acts and the structure of Aède recall the seven valleys traversed by the birds in Farid Attar’s medieval Sufi classic “The Conference of Birds.”

This live music-cinema zoom performance is directed by Elli Papakonstantinou. The music for Aède is composed by Shirish Korde. The score draws on classical South Asian as well as contemporary American and European musical languages.

Aède will be performed live simultaneously from Athens, New York, San Francisco, Den Haag and Rome via Zoom. The 22 artists involved are spanning ten time zones, representing five countries. Co-produced by Tarana Sara Jobin on behalf of the Astana and the ODC Ensemble.

Tickets are available via Eventbrite at $20 each with the opportunity to make an extra donation to support artist remuneration. We are incredibly grateful to this cast of professionals, performing from their homes because of the pandemic, and welcome donations of all amounts. Buying a ticket also enables you to watch the recording if you are not able to attend the live event.